Written by:Kemi Wale-OlaitanPosted on:June 5, 2013Leave a reply
As the G8 discusses sexual violence in the DRC, perpetrators and victims speak out about mass rape in Minova

In a small house on a hill overlooking Lake Kivu, a young Congolese soldier recounts the crimes he and his comrades committed in Minova a few months ago. “Twenty-five of us gathered together and said we should rape 10 women each, and we did it,” he said. “I’ve raped 53 women. And children of five or six years old.

“I didn’t rape because I am angry, but because it gave us a lot of pleasure,” says 22-year-old Mateso (not his real name). “When we arrived here we met a lot of women. We could do whatever we wanted.”

As William Hague unveiled a sexual violence prevention strategy at a meeting of G8 foreign ministers in London this week, what happened in Minova is a stark reminder of the huge challenges facing those seeking to solve the problem of rape in the Democratic Republic of the Congo .

On 22 November last year thousands of exhausted, battered and bruised Congolese army troops descended on the town having just lost a battle with the rebel M23 fighters in Goma, the main city in eastern Congo some 30 miles away.

Their retreat was haphazard and chaotic. The soldiers were embarrassed, angry, upset and out of control; their commanders had disappeared and the battalion and regiment structures had disintegrated.

When they arrived in Minova they were drunk, hungry and violent. The locals suffered two nightmarish days of looting, rape and murder before the army restored some discipline among its troops.

Hundreds of women were raped. It is impossible to accurately state the number of cases as victims often fail to come forward, fearing that their communities and even their husbands will reject them, but hospital director Dr Ghislain Kassongo said he dealt with well over 100 women with rape-related injuries after the army rampage. 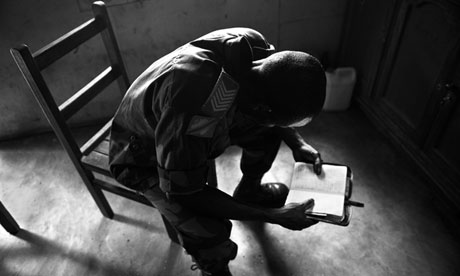 Congo: an army sergeant who says he was ordered to rape by his commanding officer. Photograph: Fiona Lloyd-Davies

At a rape victim refuge centre a couple of miles from Minova, Nzigire Chibalonza, 60, tells what happened when the soldiers came to her shop. “They beat us and beat us, and then they started to rape. Three men raped me – two from the front and one from behind,” she says, tears welling in her eyes as she nervously grabs and twists fistfuls of her dress.

“My head is still not right. I thought I had Aids, and now my husband mocks me. He calls me the wife of a soldier, he has rejected me,” she says.

The refuge centre, set up and run by a woman who was herself a multiple rape victim, is the only place she has to go. It is home to a traumatised but resilient community of women who work and care for each other. One of the victims who spoke to the Guardian there was just 14.

The scale of criminality in Minova has forced the army to take action. Military prosecutors in North and South Kivu provinces – Minova is right on the border between them – have made powerful statements, even threatening to arrest the officers who failed to control their troops.

“There have been a lot of troubles here. The soldiers are traumatised by war and so commit serious acts and crimes,” said Mokuta Amdondo, the North Kivu military prosecutor. “This is where military justice is of the utmost importance. We have not hesitated to put in place the processes to arrest the soldiers who have raped and pillaged the civilian population in Minova.

“If [the victims] are unable to identify the soldiers who committed the crimes, then we’ll apply the hierarchy principle: the commanders of the units must be pursued for these incredibly serious crimes committed by soldiers under their control.”

Observers hope a successful investigation can make Minova a watershed moment in the construction of a functioning justice system in eastern Congo. “Minova is at the centre of something, as far as justice is concerned in the DRC,” says Charles Guy Makongo of the American Bar Association in Goma. “That the investigation is already ongoing is good. But the trials and certainly the convictions will change several things in the justice sector, in the fight against impunity and the process of building the rule of law in the DRC.”

To date there have been few concrete developments. Military justice personnel told the Guardian they did not want to be involved in the case if it would lead to charges against officers, as they feared a backlash from powerful army figures. So far only three soldiers have been arrested – a sub-lieutenant, a corporal and a South Kivu-based soldier of no rank.

“If justice is done, this might stop the soldiers raping,” says Chibalonza. “I will go wherever I need to go to in order to testify against these men because what they did to me was so awful. If they are punished I do feel justice will have been delivered.”

Until significant arrests are made, however the women of Minova remain sceptical that justice will be done or that impunity will end. “The government says it will arrest these soldiers and officers,” says the head of the victim refuge centre, who wishes to remain anonymous. “They may arrest some, but then later they will just set them free again.” Unfortunately it is the gloomy predictions of the sceptics that have so far proved correct.