No Kidding, This Girl is going to Mars! 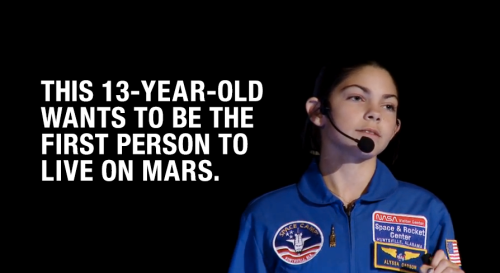 Kids can have weird wishes and dreams but so are grown ups too, right? In fact all the great innovators in human history seemed to have unrealistic aspiration(s) at some point. Names like Albert Einsten, Galileo Galilee, Charles Darwin and others had the same problem until they proved people wrong. Even then, the sizes and shapes of our dreams vary greatly in which case, let me pose this, what did you want to be when you were a kid?

Myself I wanted so much to be an adult so that I could enjoy the liberties of grown-ups and be myself. And of course my dream is to…um, well, let me just save that for another time. Okay, when I stumbled across this AWESOME story of a certain young girl I was jolted from my day dreaming so much that I can’t afford not to talk about her.

Alyssa Carson of Louisiana, US, is by far not your average kid. At the tender age of three she already had this figured out; “I WANTED TO FULFILL MY DREAM OF BEING AN ASTRONAUT. I HOPE TO BE THE FIRST OR ONE OF THE FIRST (HUMANS) ON MARS.”

That’s what I am talking about. And hers was not a kiddish fanciful thought, she really meant it and now at the age of 13 this teenager is on her way to Mars, literally. Sample this; with her own website http://nasablueberry.com/#, Twitter handle and Facebook page Alyssa is too preoccupied with posting either stuff related to developments in astronomy, celebrating her initiatives involving holding motivational talks to peers and participating in countless scientific forums or displaying new media articles that feature her as the subject. How many 13 year olds actually do that with their social media spaces? What’s more, this teenager has caught the attention of NASA and already attended the Agency’s Space Camp seven times, three visits to Space Academy, has been the FIRST person to complete all the NASA Space Camps in the world and has witnessed three shuttle launches. She has met the Mars One team in Holland, her dad says she seems cool about the dangers of her envisioned mission and she’s also a multi linguist. Okay, enough of my rambling, but what really crept through my mind with her story was a reflection on the significance Alyssa Carson might have on the gender front.

Here is someone who has deservedly earned the right of NASA to take her seriously yet she’s just a teenager. She could be a genius, but the symbolic representation in her case would no doubt impact the girl child.

Just like Malala Yousafzai became the youngest person to win the Nobel Peace Prize last year Alyssa’s story seems to be complementing the narrative that with determination and hard work even average young girls could win the support and encouragement they need to pursue their dreams.

The world of impossibilities for young girls does not exist anymore in the scale it might have had, say, 50 years ago.

While she will not be the first female astronaut if she ever succeeds in her dream, she might as well be among the first humans ever to set foot on Mars come 2030 or something and that will be such a symbolical feat for the girls world wide.

Of course she would be a grown up woman by then, but the precedent she would have set for young girls having had the unique achievement of starting off her career as a young girl would open up doors for a lot more others of her like-mindedness.

Hasn’t history taught us that we need a first for everything? Well, just this week news has broken on the discovery of up to eight previously unknown planets that could possibly support life. And who would have the grounds to doubt young girls who think they can be the first explorers of whatever else in the universe awaiting human exploration when the Alyssa Carson’s of this world would have proven even girls could aspire for the skies and beyond?

Good Luck, Alyssa, go for it, for yourself and the mothers of tomorrow.

TRENDS OF DOMESTIC VIOLENCE, ARE YOU AT RISK?

TRENDS OF DOMESTIC VIOLENCE, ARE YOU AT RISK? While the domestic violence thing is still trending, its pertinent to know that some people who are ...