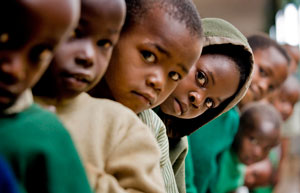 Around the world, more than half the young children out of school are girls. Where are females denied education, why and what are the effects?

Going to School (or Not)

American girls tend to be overrepresented in education, including up to the collegiate level, where the public university male-to-female gender ratio is 43.6%–56.4%.

For much of the world, particularly developing countries, the picture is much different.

Primary-age students out of school

Nearly 1 in 2 of the world’s out-of-school girls are in Sub-Saharan Africa, and 1 in 4 are in South Asia.

But things are looking up:

Why Aren’t Girls in School?

Some of the common reasons girls either don’t start school or drop out of school include:

Every year, nearly 1 in 5 girls younger than 18 in developing countries gives birth.

South Asia accounts for about half of teen pregnancies in emerging countries.

In developing countries, pregnancy-related deaths kill 70,000 women ages 15-19 each year, the biggest cause of death for that age group.
Why It Matters

Beyond the morality issues, educating women can help boost the economic future of struggling countries.

As female education goes up, a host of societal indicators improve:

Educated women will participate more in the labor force and, in turn, contribute to the GDP.

Children of educated mothers (especially daughters) are more likely to go to school and have higher levels of educational attainment.

“The persistent constraints and deprivations that prevent many of the world’s women from achieving their potential have huge consequences for individuals, families, communities and nations. Expanding women’s ability to make decisions and take advantage of opportunities is critical to improving their lives as well as the world we all share.” — World Bank Group President Jim Yong Kim