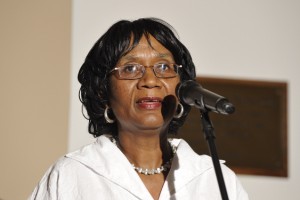 There was a telling moment, early in Bola Adesola’s high-flying banking career, when the value of a woman’s perspective became abundantly clear. At an executive committee meeting of the bank where she worked, colleagues were discussing the company funding of employees’ medical treatments.

“They were willing to pay for prostate treatment but had automatically ruled out antenatal care or fibroid treatment. So I said: ‘You may not get fibroids, but I don’t suffer from prostate trouble.’”

Until her appointment, the board had been all-male.

“They simply hadn’t realised the policy was unfair. It took the presence of a woman to point that out.”

Ms Adesola, who is today chief executive officer of Standard Chartered Bank Nigeria, has spent much of her career making similar interventions. Twelve years ago she was part of a group that set up Wimbiz (Women in Management, Business and Public Service), a non-profit organisation aimed at raising women’s profiles and influence in Nigeria.

In 2012, she was appointed to chair a subcommittee on women’s economic empowerment by the Central Bank of Nigeria, key backer for a $1.2bn microfinance development fund, 60 per cent of which is earmarked for women-run businesses. African women, she says, need such targeted actions. While naturally entrepreneurial –

– they are far more financially cautious than their male counterparts. Ms Adesola is convinced such efforts are paying off.

“Progress may not be as rapid as we would like, but a continental consciousness is spreading about the need for female representation and greater diversity at all levels of society.”

Yet sub-Saharan Africa’s corporate sector appears to be moving only slowly towards gender parity, lagging behind a faster-moving political world. A few decades ago, an African female head of state might have seemed a fluke. Today, Ellen Johnson Sirleaf has been president of Liberia for more than eight years, few doubt the competence of Nigerian Finance Minister Ngozi Okonjo-Iweala, South Africa’s Nkosazana Dlamini Zuma chairs the Addis Ababa-headquartered African Union, and Graça Machel is probably as respected for her role as human rights campaigner and African “elder” as she is for being widow to two heads of state.

Less visible, but indicative of change, the introduction of gender quotas in elections is transforming the profile of African parliaments too. On average, women now account for 22.6 per cent of national legislatures across sub-Saharan Africa, putting the region only slightly behind the Americas and Europe and ahead of Asia, the Pacific and Arab states. The gender balance in the boardroom, in contrast, is more skewed. A Wimbiz census in Nigeria found only 16 per cent of board members at commercial banks, insurance companies and government banks were women in 2013, barely changed on the previous year. While 27 per cent of top management positions at the commercial banks were held by women in 2013, insurance companies and government banks recorded a disappointing 20 and 14 per cent respectively. In South Africa, the continent’s other economic powerhouse, the share of working women in senior management positions has been static for the past seven years. A survey by Grant Thornton Business, the professional services company, shows only 26 per cent of top jobs are filled by women and 21 per cent of local businesses have no women at all in senior management.

The World Bank’s Development Report for 2012 recorded that 79 per cent of jobs held by African women were in “vulnerable” employment – either self-employed or working as unpaid family members – compared with 63 per cent for men. Since female labour-force participation is also much lower in northern Africa and swaths of west Africa, according to the Food and Agriculture Organisation, growth prospects are blighted by the fact that nearly half the workforce is unused. It is a picture that exasperates Stella Nkomo, professor of Human Resource Management at the University of Pretoria, who says when asked about women’s representation in Africa:

“There’s no doubt that things are better for women overall in Africa; there’s been progress. But the question remains: is it fast enough?”

She sees targeted actions such as Nigeria’s earmarked fund, as necessary to correct ingrained imbalances. But there is a frustrating gap, she says, between the expanded presence of women in African parliaments, senates and cabinets, and the policies coming from those very institutions.

“All African nations pay a lot of lip service to the issue of gender equality, but more deliberate interventions are needed if there’s to be any real change when it comes to the things that matter to women,” says Prof Nkomo.