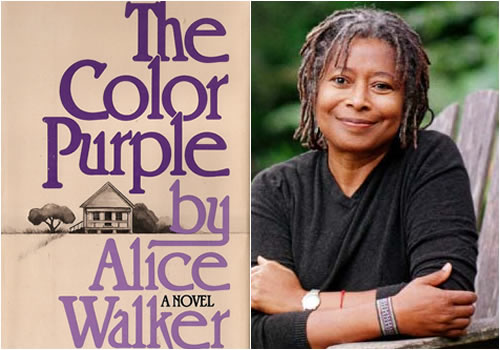 The story centres around the life of Celie, the novel’s protagonist. After being raped by her stepfather, she is warned not to tell anyone; otherwise it would kill her mother. Cowed by this threat, Celie chooses to tell God by writing him letters on the matter as well as other harrowing experiences she goes through. The stepfather, Alphonso (Fonso for short), continues to sexually abuse her, producing thereby a boy and a girl which he eventually steals and sells to an old friend turned missionary. Although mentally unstable, Celie’s mother’s suspicion of the incestuous affair ultimately kills her.

After the mother’s death, Celie is married off to Mr Albert who equally uses her as a sex-slave and care-giver to his seriously neglected motherless children. As Albert’s wife, Celie’s life is hard. She works on his farm tirelessly and gets regularly beaten by her husband. When her sister, Nettie, runs away from home to escape sexual harassment from her stepfather, to seek refuge at her sister’s place, Celie’s hope of a collaborative escape with her sister is renewed. However, Albert assumes the turn to sexually harass the younger sister he originally preferred to Celie. Her intransigence earns her banishment from the farm and Celie is again left alone to face the battles of life. Later on, relief comes her way when Shug Avery, a blues singer and ex-lover of Albert is brought into the house for convalescing. Through her intervention, Albert discontinues his violent treatment of Celie. Celie and Shug become lovers. As Shug renews her sexual affair with Albert, the two women become bed-sharers with Albert. Naturally, jealousy initially ensues but Celie later learns to cope with the situation.

Shug continues to stay on the farm giving Celie an enjoyable company until she fully recovers and eventually leaves; this makes Celie sad. After sometime, Shug returns with a man named Grady as her husband and both Celie and Albert are unhappy with the development. During this visit, Celie and Shug share a lot of past experiences, especially of love and lack of it. They get more intimate and make love more regularly. Through Shug, Celie discovers that Albert has been standing between her and letters fom Nettie, from Africa. She is so enraged that she contemplates murdering Albert but Shug succeeds in talking her out of it. From the letters, Celie gets to know that her sister is not dead after all but that she followed her suggestion to look for a job with the minister that adopted her children, Olivia and Adam. Celie is quite thrilled to know that Nettie is with her children, caring for them. When Shug decides to leave again, she announces her decision to leave with Celie. Albert is outraged and he protests but Celie dismisses him and insists on leaving; reminding him of the pain he had caused her in the past. Celie also finds support in another woman, Sofia. Albert tries to slap Celie but she stabs his hand.Eventually, Celie leaves with Shug. After his wife’s departure, Albert becomes sober, begins to work and take care of his children. As for Celie, she establishes the business of pant making in Memphis where she lives in Shug’s house and makes a success of it. Later she receives the news of Alphonso’s death and that much of the estate he left behind actually belongs to her and Nettie. Initially reluctant to go for it, she eventually goes back to her childhood home on the prompting and in company of Shug. While Celie cleans the house in preparation of the returnees from Africa, Shug goes back to Memphis and on to another show trip during which she falls in love with a teenage member of her band. On discovering this, Celie leaves Shug, takes up residence in her own house and concentrates on her pant making business.

Significantly, the discovery of Nettie’s letters introduces us to the major subplot of the story, which focuses on Nettie, Samuel, Corrine and their children in Africa. Nettie is in Africa with the missionaries, Reverend Samuel and wife, Corrine and their adopted children, Olivia and Adam, who, unknown to them and their parents, are Nettie’s niece and nephew respectively. In this subplot, attention focuses on three areas: the lives of the missionaries and their family, Africans and their ways of life and, of course, missionary activities. The family lives in peace and happiness until Corrine begins to grow suspicious of Nettie, thinking that there is something between her and Samuel, her own husband. She thinks that the two had probably known each other way back in the United States and feels that Olivia and Adam are products of their past affairs. She feels so strongly about this that it gnaws at her heart. By the time the truth is revealed, she has become too weak to survive. After the death of Corrine, Samuel marries Nettie. The children grow up well and Adam falls in love with an African girl called Tashi. Some of the letters from Nettie talk about some of the challenges faced in their missionary activities; for instance, African scepticism to Western values, reluctance to educate the girl child, attachment to their own views and so on. Their virtues of hospitality and friendliness are also noted as legendry. After about three decades, they consider returning home. They return home with Tashi, the African beauty, and they are welcomed by Celie, Shug and Albert.

MY VIEW: This is one of the most painful books I have ever read but it tells the story so beautifully that if you are an African woman you have to read it. It tells the African woman’s story and her journey through life; dishonoured by men and despised by her own gender.And I have to admit, the telling of the story through letters helps to advance the plot making it more realistic and melancholic. It might not be one of my favorite books since I love feel good books a lot, it is one of the most serious books I’ve read forcing me to reflect on how life must have been back then and just how much pain women and girls had to go through. I had to see and feel the pain with Celie. I’m so grateful we’re no longer in those times but I couldn’t help but wonder how many more innocent girls still go through this. It is a book mothers and women should read so as to save the younger generation and spare them such horrors. It’s a book worth reading.