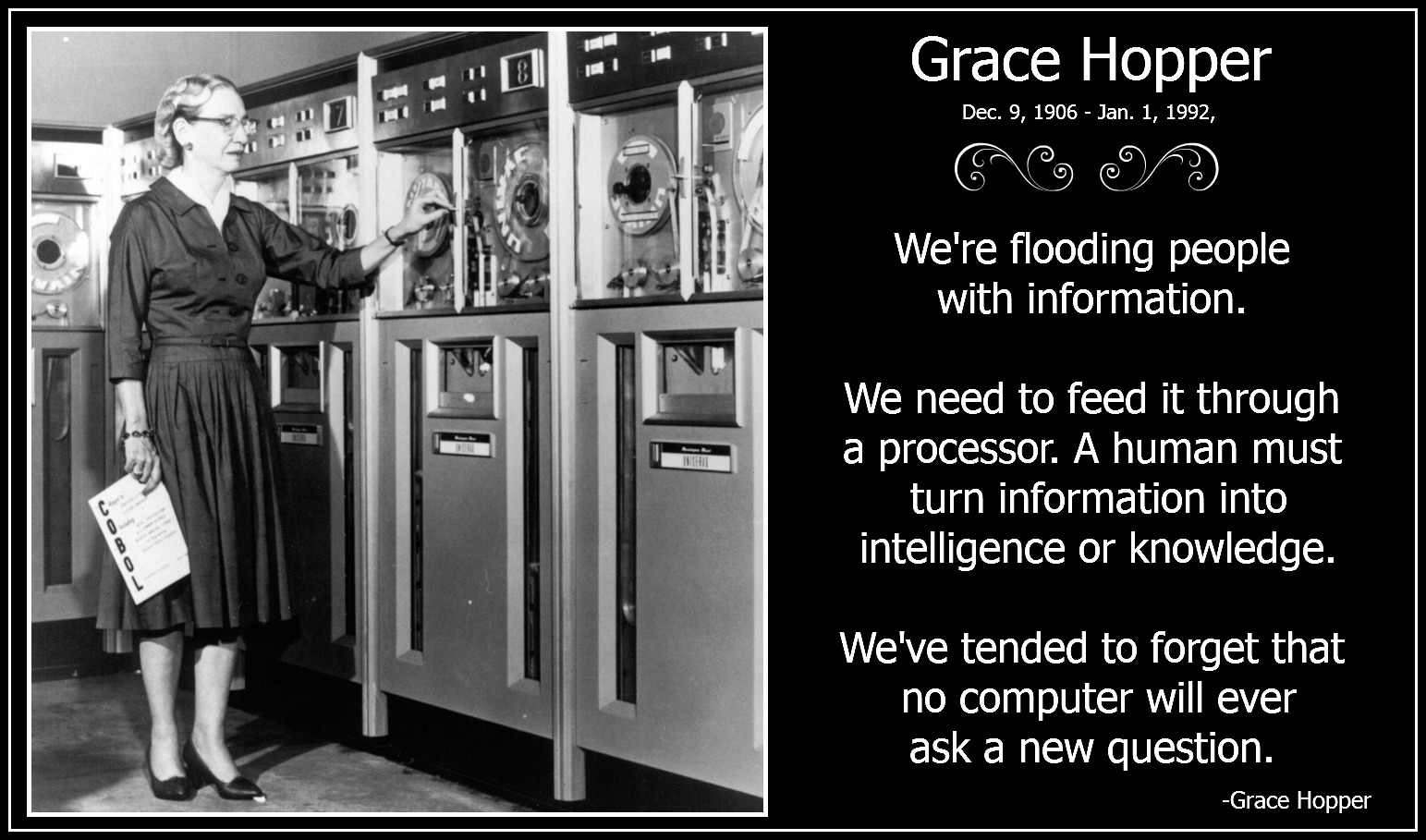 United States Navy Admiral Grace Hopper (1906–1992) was one of the first programmers in the history of computers. Her belief that programming languages should be as easily understood as English was highly influential on the development of one of the first programming languages called COBOL. It is largely due to Grace Hopper’s influence that programmers use “if/thens” instead of 1s and 0s today.From a young age, Grace had a curious and analytical mind

When she was seven, she decided she wanted to figure out how clocks worked. To find the answer, she took apart every single alarm clock in the house! When her mother found out, instead of scolding Grace, she limited her to taking apart only one alarm clock at a time.Grace’s parents encouraged her curiosity in other ways, too. Her mother, Mary Campbell Van Horne Murray, had been very interested in math as a young woman, but hadn’t been able to study anything beyond geometry because it wasn’t considered proper for a lady at the time. She made sure to encourage Grace in her interests and not to limit her based on her gender.Grace’s father, Walter Fletcher Murray, wanted all of his children to be self-sufficient and made sure his two daughters had the same education and opportunities as his son, which was unusual for the early 20th century. With this encouragement, she went on to study math and physics at Vassar and then Yale, earning her PhD in mathematics in 1931.

After graduating, Grace stayed at Vassar to teach math for the next ten years before turning to the US Navy.A ship in port is safe; but that is not what ships are built for. Sail out to sea and do new things. Grace HopperWhile women had been allowed to serve in the navy since the 1800s, they were limited to nursing and, starting with the turn of the century, some administrative duties. With the start of World War II the military became a little less particular about gender. In 1942, the Navy put together an all-female division called Women Accepted for Volunteer Emergency Service (WAVES), giving women the opportunity to do more for their country during a time of great need.Grace Hopper took a leave of absence from teaching at Vassar to enlist in the US Navy Reserve in 1943, becoming a part of WAVES. She had to obtain an exemption in order to enlist since she weighed in at 15 lbs (about 7 kg or 1 stone) below the required weight of 120 lbs (about 54 kg or 8.5 stone). Despite what could have been a disadvantage, she graduated first in her class and was assigned the rank of lieutenant, junior grade. She was immediately assigned to the programming staff for the new Mark I computer (an electro-mechanical computer weighing over 10,000 lbs/4500 kg) at Harvard University.After World War II ended in 1945, Grace requested a transfer to the regular Navy, but her request was denied due to her age — she was 38 at the time. She was now completely hooked on computer programming, turning down a full professorship offer from Vassar to continue to work at Harvard as a research fellow under a Navy contract.

It was in the 1940s that Grace Hopper’s most famous anecdote occurred: Grace and her team of associates were having a hard time figuring out what was causing a glitch in the Mark II computer they were working with. Finally, they discovered the source of the issue: a live moth was stuck in one of the electrical switches controlling a circuit.Grace loved to tell the story about how they “debugged” the early computer by removing the moth, bringing the obscure engineering term into popular use in computer science.In the 1950s, Grace started working for a company called Eckert-Mauchly Computer Corporation as the senior mathematician on the team developing a new computer called UNIVAC I (UNIVersal Automatic Computer I), which became the second commercial computer produced in the United States. It was at this position that she created what is called the “A compiler.” In computer programming, a compiler is a program that transforms source code written from one computer language into another, usually less complex, language.While compilers are indispensable to programmers today, they were revolutionary at a time when computers where mainly used, as their name implies, for performing computations:“Nobody believed that,” she said. “I had a running compiler and nobody would touch it. They told me computers could only do arithmetic.”Eventually her work there was recognized and she was named the company’s first director of automatic programming two years later.To me programming is more than an important practical art. It is also a gigantic undertaking in the foundations of knowledge. Grace HopperGrace Murray Hopper at the UNIVAC keyboard around 1960In 1959 a consortium was formed called Conference on Data Systems Languages, or CODASYL, with the purpose of developing a standard programming language that could be used universally on any computer. Grace Hopper was asked to serve as the technical consultant on the committee, which later developed the programming language COBOL. She also developed validation software for COBOL to make sure the language could perform its function. COBOL, which stands for “COmmon Business-Oriented Language”, is still used in order-processing business software today.We’re flooding people with information. We need to feed it through a processor. A human must turn information into intelligence or knowledge. We’ve tended to forget that no computer will ever ask a new question. Grace HopperGrace continued to work on COBOL as the director of the Navy Programming Languages Group, and was promoted to captain in 1973. Throughout the seventies, she pioneered work in designing and implementing technology standards for the US Navy. The tests and standards she developed were later adopted by the National Bureau of Standards (today called the National Institute of Standards and Technology), and helped to shape the future of programming.

Humans are allergic to change. They love to say,

“We’ve always done it this way.”

I try to fight that.

That’s why I have a clock on my wall that runs counter-clockwise.

Grace HopperGrace tried to retire twice, in 1966 and 1971, but both times she was recalled to active duty indefinitely. She was promoted to commodore in 1983, a title that was later renamed to “rear admiral, lower half,” and finally retired for the last time in 1986 at the age of 80. At the time, she was the oldest active-duty commissioned officer in the US Navy. At her retirement she was awarded the Defense Distinguished Service Medal, the highest non-combat award possible by the Department of Defense. She then worked as a consultant to Digital Equipment Corporation until her death in 1992.[Grace Hopper appears to be] ‘all Navy’, but when you reach inside, you find a ‘Pirate’ dying to be released” Jay Elliot, authorIn the course of her lifetime, Grace Hopper was awarded 40 honorary degrees from universities around the world, along with numerous awards and honors including:First winner of “Computer Science Man of the Year” award from the Data Processing Management Association in 1969First person from the United States and the first woman from any country to be made Distinguished Fellow of the British Computer Society in 1973. First woman to receive the National Medal of Technology as an individual in 1991. Nicknamed “Amazing Grace,” she serves as a role model and inspiration to women working in a variety of STEM fields today. Without Grace Hopper’s work and the influence of her ideas on the development of computer programming, the field of computer science would look very different today.The most important thing I’ve accomplished, other than building the compiler, is training young people. They come to me, you know, and say,

And I back ‘em up. They need that. I keep track of them as they get older and I stir ‘em up at intervals so they don’t forget to take chances. Grace Hopper

This post was written by KeriLynn Engel and originally appeared on amazingwomeninhistory.com.

Women, Technology and The Bigger Space

The End Of An African Legend