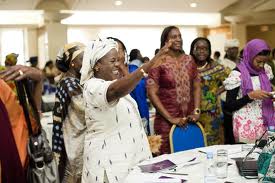 Having travelled a few countries of Africa, trying to rally women together for a cause that will benefit women and improve the status of African families, I can speak from experience about the response of women in general to such activity. Some people have observed that one of the very difficult tasks to carry out in life is to try to gather women together in a group for a cause, especially when the one leading such a cause is a woman. In fact, I have heard of a psychologist lamented: ‘women are the most difficult specie of the homo-sapiens!’ Although, being a woman myself, I may not be in a right position to pass a direct comment on the issue; however, there is no doubt that this is a very controversial issue on which many commentators, analysts and female activists have had their opinion aired or voiced. In fact, there are cases that have been presented as reality studies; of women groups that have broken up because members are not able to work together in unity. Several promising associations that are gender (feminine) based have been forgotten today because members could not tolerate each other as females.The question here is, ‘what is the problem with us women?’ ‘Why is it so difficult for us women to work together peacefully? Well, answers to these questions are varied, but somewhere along the line is a hidden truth. A psychologist recently explained that women have delicate and emotional make up which make it difficult for them to withstand harsh realities. According to the psychologist, every woman wants to be pampered and treated as a queen; so, if women are together, and all of them want to be treated as such, then there will be problems. In fact, in such a situation, unity will be very hard to achieve. This is why, most times, successful
women seem to be hard and masculine-like, ready to face hardship and relentless in their bid to succeed at whatever they do. So, to rally women, one must understand these intricacies and be ready to work within its confines; and for women who are aiming for the sky, this should also be a good lesson. What is your opinion on this?

7 Physical Symptoms of Anxiety that May Come Out of Your Hands Anxiety is a psychological problem, but it can manifest itself in physical symptoms ...