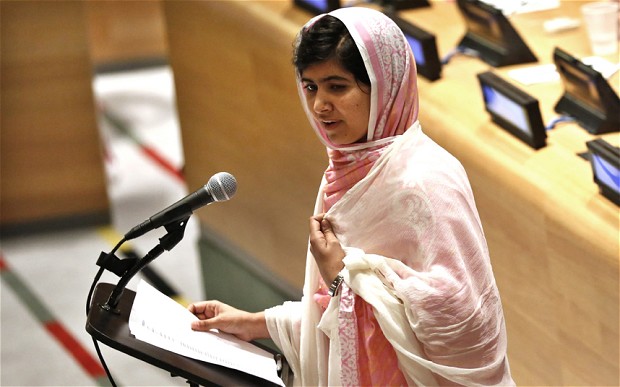 I am not sure why I developed the interest in writing on this issue; for one thing, I am a very passionate supporter of everything that relate to women and girls. Secondly, the development of the female gender in any way remains the focus of my activity in any form. Therefore, anything that would promote the female gender will have my unflinching support, always. However, the news of the nomination of Malala Yousafzai, the 16-year-old Pakistani girl who survived a Taliban assassination attempt came as a surprise. No doubt, the fact behind her nomination and the truth of the matter being that she enjoys massive support around the world should be enough to stand her out. Her call for better education opportunities in her native Pakistan inspired thousands to sign petitions calling for her to win the Nobel.

In spite of all these facts however, I keep having this tug somewhere deep in my heart that the time is not yet due for this young girl to clinch this big medal. It is my candid opinion that anyone who wins the Nobel Peace Prize, especially a woman, should have ‘fought’ gallantly for the medal. It should not just be about having one’s life in danger somewhere in the world, (many people actually lose their lives daily, and no one remembers them), nor should it be about a media glitz on the life of a young girl. I belief it should be about the TOTALITY of someone’s activity, in the pursuit of peace. The woman who inspired Alfred Nobel to institute this prize, a friend of Nobel, ‘Baroness Bertha von Suttner, was a leader in the international peace movement in the 1890s, and she received support from Nobel for her Austrian Peace Society. When Nobel died, he bequeathed money for four prizes for scientific achievements, and one for peace. Though many (including, perhaps, the Baroness) expected the peace prize to be awarded to her, three other individuals and one organization were awarded the Nobel Peace Prize before the committee named her in 1905’.

Although this woman inspired the institution of the prize, yet, it is common knowledge that fewer women have been awarded the prize till date. However, in recent decades, there have been an increase in female winners, and it would be nice to have a woman receive the award this year. Still, I will prefer to wait a few more years to see some more achievements from Malala, especially now that she lives in England and continues to campaign for human rights through her own Malala Fund. Let the support pour in for her to do more, for fellow girls, rather than have her work ‘over-prized’, through an over rated prize.

Another Look At Women

LIVES ON THE FRINGES 2

LIVING TO BE A DAILY HEADLINE