Jungle justice and the ripple effect of bad leadership 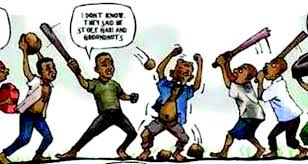 Few years ago, 4 young men were lynched to death by some group of aggrieve youths in Alu community of rivers state, Nigeria. These men were alleged to have stolen some valuables.

This blatant act of injustice meted out to the victims made headlines on main stream media and went viral across the internet. Human rights activists took stance against this barbaric act with protests and the call for a law against jungle justice.

The state government through the commissioner of police condemned the evil act and vowed to conduct investigation to bring the culprits to book.

3 years down the line, the culprits of the act have not been arrested or brought to book neither was any sane law implemented to avoid a reoccurrence.

Few days ago, the evil jungle justice rose its ugly head again as a young man alleged to have stolen garri was also lynched to death by some group of aggrieved youths in Lagos.

As the news went viral and many quick to call the culprits involved in the dastard act insane and inhuman, I rather think jungle justice is a ripple effect of bad leadership. The truth is: When the system that is supposed to protect its people fails, the people resort to other means of protecting itself.

The people have long been neglected by the leaders they elected to provide security for them. While they sleep daily with an eye open, their leaders deployed all available security apparatus to rather protect themselves.

After the horrible act of injustice was meted to those young men in River state, no serious legislator took up the issue to push for a law against jungle justice. The law which stipulates that an accused is presumed innocent until proven guilty by a court of law has only been effective to protect the elites and not the people. This law suddenly becomes relevant when they are accused to have stolen public fund but remains ineffective when it’s about the common man.

Before we are quick to cast stones on the perpetrators of the evil act of jungle justice, let’s also be quick to hold our leaders accountable for neglecting their constitutional duty of protecting its people.

No Kidding, This Girl is going to Mars!

Kids can have weird wishes and dreams but so are grown ups too, right? In fact all the great innovators in human history seemed to ...