Violence against women and girls is one of the most widespread violations of human rights. According to a 2013 WHO global study, 35 per cent of women worldwide have experienced either physical and/or sexual violence. However, some national studies show that up to 70 per cent of women have experienced physical and/or sexual violence in their lifetime from an intimate partner. 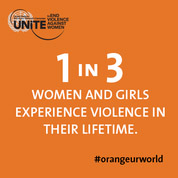 To raise awareness and trigger action to end this global scourge, the UN observes International Day for the Elimination of Violence against Women on 25 November. The date marks the brutal assassination in 1960 of the three Mirabal sisters, political activists in the Dominican Republic. 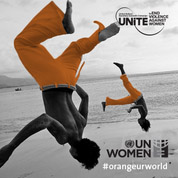 Every year, 25 November and the ensuing 16 Days of Activism against Gender Violence which follow (ending on 10 December, Human Rights Day) are commemorated around the world, providing individuals and groups a chance to mobilize and call attention to the urgent need to end violence against women and girls. 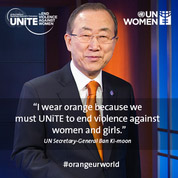 As part of this year’s theme “Orange the World in 16 Days”, we invite you to wear orange – the official colour of the UNiTE campaign. On Orange Day, now observed on the 25th of every month, worldwide activities by UN country offices and civil society organizations strive to highlight efforts to prevent and end violence against women and girls. This year, the UNITE Campaign is extending Orange Day throughout the 16 Days of Activism.

Negative Effects of Foundation Cream Have you ever observe that virtually all the stylists will prefer to use foundation cream on their clients? This is ...