Kenyan women on Monday demonstrated against increasing violence against girls and women, as the country begins to confront an attack in downtown Nairobi where a woman wearing a miniskirt was stripped naked.

Some 1,000 women in miniskirts, tights, and trousers danced, sang, and chanted “my dress my choice” and “shame, shame” in solidarity with the victim, who is now being celebrated as the “woman in red.”

They marched to the bus terminal where the assault took place about two weeks ago and handed out roses as a sign of peace. Today’s protest was peaceful but also charged with emotion; it lasted nearly three hours and snarled downtown traffic. Some men joined in, while others watched by the sidelines, jeering at the women.

The protest more largely appears to stem from a series of sexual abuse incidents targeting underage girls, and the recent attacks related to attire was an unusual demonstration of solidarity. Women have become frustrated that sex crimes are not treated with urgency by the police and courts, and activists here are concerned that sentences handed out to sexual offenders by the court are too lenient to be a deterrent.

“This is the beginning of the liberation of women in Kenya. It has started now and it will not stop. It must be respected. We should not be humiliated. My dress is my choice,” says Diana Rose Okello, a Nairobi resident who has played a key role in the protest. 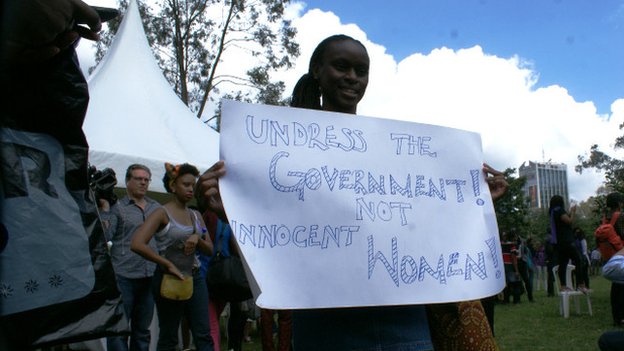 The attack at the bus station came to light after a video that captured it went viral, igniting outrage and anger. Shortly after the assault, Ms.  Okello, who lives in the west-central neighborhood of Kilimani, posted about it on Facebook. The Kilimani Mums page then inspired the women’s dress-freedom campaign. The campaign goes by hashtag #mydressmychoice.

A statement by the Kilimani Mums in recent days argues that the stripping and assault of women is part of a pattern of growing impunity and disregard of human rights in Kenya. “Such attacks which seem to be on the rise, do not only offend our Constitution, but are also morally offensive and only serves to ridicule this nation,” the statement read in part.

Deputy President William Ruto over the weekend condemned the attacks as barbaric and called for arrests. Some prominent women politicians and business persons are joining the protest.

“Teenage girls, or woman wearing skimpy dresses, have not broken any laws. Any men who touch them indecently, assaults and strips them has,” said Esther Pasaris, a prominent Kenyan entrepreneur in a tweet. Ms. Pasaris joined the protest march.

The attacks have cast a certain pall in Nairobi. Evelyne Gathoni, a research analyst who attended the protest, says she fears that if this is not stopped, she may not be able to go to work or go home after work in the near future.

“I wonder how it could happen in broad daylight. My concern is [the police] are treating this as a social issue, not crime,” she says, as she sings along to the Jamaican singer Bob Marley’s well-known song, “Get Up, Stand Up for Your Rights.”

Eunice Kang’ethe, an English teacher and a Kilimani Mum, says stripping women because of their dress not only strips them of clothes, but of their dignity.

“We are here to enforce the dignity of women. How women dress is not a matter of the public,but an individual choice,” she says.

But some males in the crowd argued that some forms of dress violate religious codes as well as African cultural norms. Some also charged that the women were paid to go on the street and protest. Samson Ong’era, a salesman and father, said the protest puts him in a difficult situation, since now his daughters may refuse to dress modestly, and believe that fashions like miniskirts are acceptable in his family.